FIFA 23, the last FIFA ever, has arrived. After announcing the end of the partnership between EA Sports and FIFA, the Canadian developer is promising “the best game ever”. With the release of the long-awaited crossplay and stunning graphics, the company delivers a better product than the latest titles in the franchise and leaves fans wanting more. See now the full review of FIFA 23 on PlayStation 5 from a key provided by EA.

Crossplay is hit and miss

After years of public demand, EA Sports brought the FIFA franchise together and the ability to play against different platforms, but with caveats. Crossplay in FIFA 23 will only take place in one-on-one and online mode, meaning no career, pro-club or volta mode.

While one of EA Sports’ big hits for FIFA 23, crossplay could cover a wider area and be more inclusive. One mode that can benefit from this feature is Pro Clubs. Forgotten by EA, the popular mode in Brazil won’t be eligible for this update, which will be limited to Ultimate Team, Seasons and Online Friendlies.

Another mistake EA made in implementing crossplay was not integrating the Ultimate Team market. The card mode transfer market has changed and now includes all consoles (old or current generation) together, but excludes PC. Players who buy FIFA 23 through Origin or Steam will be able to meet people from the consoles, but will have a niche market for buying cards and consumables.

Gameplay is always an important issue at the beginning of FIFA. It’s classic to hear phrases like “nothing has changed”, “it’s always been like this since this release”. It is not true. When switching from FIFA 22 to 23, the difference in gameplay is noticeable.

Speed, ball and player physics, passing, finishing and other aspects may change a bit, but they are already changing the lives of those who play the EA Sports title a lot. For FIFA 23, the developer has promised corresponding changes to running, shots on goal and aerial ball confrontations between goalkeepers and forwards. 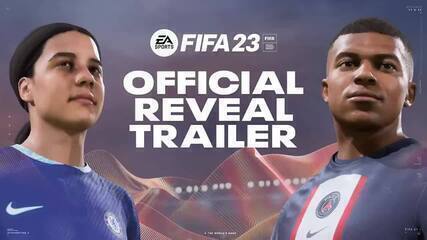 After only three days of testing, according to ge, FIFA 23 strives to provide a more realistic gameplay experience. The animations are more fluid compared to the previous title and make the experience more enjoyable to both watch and play.

The new sprint dial (long, explosive, and controlled) helps balance out ultra-fast players like Vinicius Jr. Or Mbappe. Although slower, a quality defender like Van Dijk can quickly get to a forward if the distance covered is long.

EA’s biggest new gameplay and skill gap for FIFA 23, the powerful strike (super kick) is not unchanged among virtual soccer games. Rival eFootball already had this command from the 2022 version. The Canadian developer’s new finish to the game is welcome, fun to use and doesn’t feel overpowered.

The ultimate team and new chemistry

Since the launch of the Ultimate Team mode in FIFA 09, the mode has had the same premise of combining cards between cards to form the perfect team. As of FIFA 23, this has changed. No more classic lines between players in green, yellow and red, indicating chemistry between the cards.

– says EA about the change in chemistry

EA’s idea is to give the player more freedom in FIFA 23 Ultimate Team. According to producer Azlan Mustafa, the new game in the franchise will allow you to create the team that the fans want without so many strings.

Although it no longer has the classic lines, FIFA 23’s chemistry system is very similar in concept. Players from the same league, same nation and club receive a bonus for being in the same team. The big difference from previous versions is that cards that have this link no longer need to be close to each other.

A good example is if a player wants to use full-backs Kyle Walker and Joao Cancelo, both from Manchester City. In FIFA 22, it was necessary to have a Premier League centre-back, as the right-back was not connected to the left-back, or to use defensive midfielders from the same league or nation.

Now it won’t be necessary. The game understands that they are part of the same team and uses the same club link and links to both Walker and Cancelo’s chemistry. This happens for all positions.

One of the changes coming to FIFA 23 that makes the most sense is the secondary position. Some players will have more than one position on their card in Ultimate Team. An example given by EA Sports at an event closed to the press was the side Cancelo plays on both the right and left.

To change the position of the card, it will be necessary to use a specific consumable. Each player will have a position change based on real football.

Another awesome new feature in Ultimate Team complements the idea of ​​making the mode “less punishing”. No longer does it matter if a player has zero chemistry or is in the wrong position, they will no longer lose skill points for it. The card will simply no longer receive bonuses. Anyone is free to become the next online sparrow teacher. Want to follow Fernando Diniz and put right winger Caio Paulista on the left? Feel free!

The biggest hit of FIFA 23 is undoubtedly the inclusion of Ted Lasso and the club AFC Richmond with some of the actors involved in the series. EA is starting to shed the advertising shackles imposed by its FIFA contract and previews what EA SPORTS FC can expect in 2024.

Another important addition that can give career mode a boost for those who want immersion and realism is the presence of real trainers with available faces. Any manager can be selected from the English, Italian and other big, small and medium leagues of the football world. Even the fictional character Ted Lasso can be chosen to manage any club in the game.

With prices ranging from R$498.90 to R$298.90, FIFA 23 is far from affordable for the majority of the Brazilian population. If you’re one of the avid Ultimate Team players, it’s worth experiencing the changing chemistry of the start of a new era. If you prefer career mode and like to approach realism and delve into offline modes, expect to be promoted. The investment will be more valuable.

Remember: FIFA 23 can be tested for 10 hours with EA Play. The developer makes the full game available for subscription and the player can take the time to decide whether to buy the game or not. The service still gives 10% on game purchases.