At its highest points, Midnight Fight Express shines with super-satisfying combat, honoring the modern beat-em-up concept. Developed largely by one person, the game features an impressive variety of weapons, strikes, scenarios, and above all, enemies.

On the other hand, the game has a poorly developed narrative and a soundtrack that I particularly hated.

A game made almost entirely by Poland’s Jakob Dzwinel, Midnight Fight Express is a beat’em up that puts the player in the role of a human known as Baby Face who has lost his memories. He is awakened from a long sleep by the arrival of a talking drone in his house, introduced to us as Droninho, a robot that seems to know a lot about the hero’s history.

You and Dronio set out together on a one-night stand to stop a group of gangs who are planning to take over the so-called City of Tomorrow, a city with an atmosphere that combines Batman’s Gotham with Cyberpunk’s Night City.

If you want a game with satisfying and violent battles, Midnight Fight Express offers that and more with amazingly fluid combat. The game has a total of 40 stages – some longer than others, with different scenarios and hordes of enemies.

Variety is the perfect word to describe the combat in Midnight Fight Express. The game has a skill tree, with options for attacks, parries, finishers, ropes, and secondary weapons.

There are a total of 40 unlockable skills and the game allows you to customize the combat to your liking, new moves are unlocked with points you collect at the end of each level and each skill is worth one point.

One aspect that bothered me about this is the lack of an unlocked skills area in the pause menu to consult stages. The game only allows you to see hits between stages, which requires a bit of creativity when beating.

Coming back to variety, there is an important element of beat up games: weapon variety. In Midnight Fight Express, anything can be used to kill, from guns, in fact, to plates of food and other unusual objects.

The game gives a total of 100 weapon options. Even firearms were a mystery to me at first, but I gradually got used to them. These types of weapons are ideal for ranged combat and terrible in close combat. So, in such cases, it’s always better to opt for a stick or something else that you can use to hit your enemies. 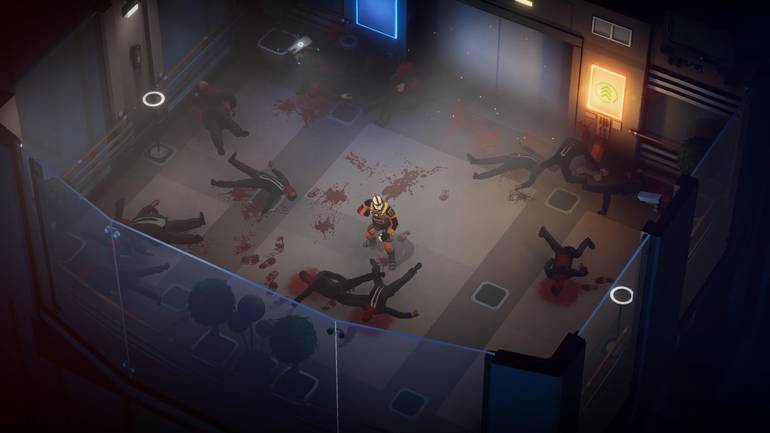 I played with an Xbox series controller and you have to aim with the right stick and press RT to shoot. This was hard to get used to because it felt much more intuitive to me to FPS and TPS all my life, aim with LT and shoot with RT. However, the LT is dedicated to the Focus instrument, which was virtually useless during my entire trip.

In my opinion, the choice of some buttons is not very intuitive, and this is not limited to shooting: I also felt this in LB, which has two different functions depending on the case: to finish the enemy or to use the secondary weapon. For other types of games, this one-button scheme might work for a variety of situations, but it didn’t during the frenetic battles.

These are the details that actually hinder the gameplay and the fluidity of the game at certain moments. However, on a larger scale, combat is the best part of the experience, with plenty of blood and violence.

Henchmen on the right, zombies on the left

Midnight Fight Express surprises with the variety of enemies. The game has no shame in giving wings to the imagination and showing all the creativity of those who brought it to life.

We start the game facing the Bozos, who are simply henchmen from the C series Boss, the game’s big villain. But with each new level, more groups of enemies appear. Everything is created with great creativity, from common criminals, developers (yes) and even zombies.

Some enemy groups have quirks when it comes to combat and may depend on specific weapons to defeat them.

A narrative that hurts 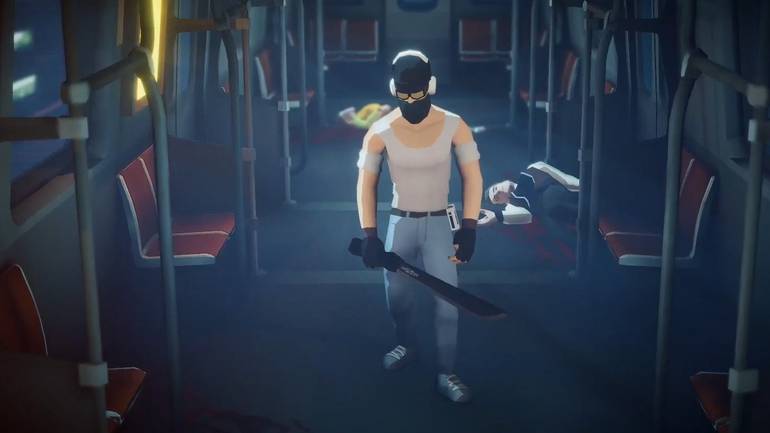 My nine-hour journey up the forty steps was satisfactory from a combat point of view. But at the same time, every dialogue presented made me roll my eyes.

The game brings a narrative context in which the player is placed to fight against gangs that are subsidiaries of a larger boss. Throughout the process, you will discover the purpose of this battle and what is, in fact, the reason why you go through all these scenarios and brutally kill everything and everyone in your path.

My problem with the story is that it gradually reveals itself in an extremely boring way, throwing in more dialogue than is necessary in the middle of a fight and interrupting the fluidity of the fight for unnecessary conversation.

Midnight Fight Express is localized in Brazilian Portuguese, which is great and makes the story easier to understand. The problem is that often our companion, Dronion, who does most of the narration, has lines aimed at “acidic” humor and punch.

It was fun at first with lots of swearing and references to brutality in the dialogue, but after a few hours of playing, hearing it from Dronio’s perspective becomes unbearable.

While the narrative is such a low point of the game, I believe it’s not the focus of the title that is the biggest appeal of the combat. 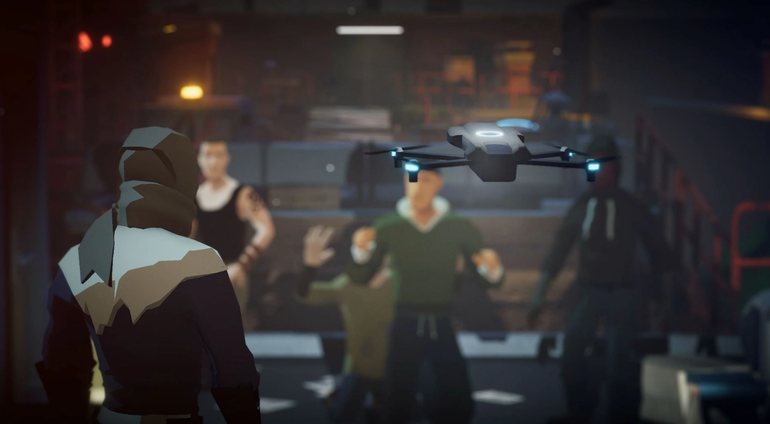 The game’s sound effects during combat moments are well done. The sounds of some hits add even more immersion to the game. However, the screams – both yours when you die in stages and the screams of your victims – are unbearable.

As for the soundtrack, I see it more personally, but I turned off the music after a few hours of playing – which even earned me the achievement “Why did you do this with Noisecream?” Which essentially consists of turning off the music volume.

This is a soundtrack that is more oriented towards electronic music. I didn’t particularly like it. So I chose my own playlist during gameplay, which made the process much more fun. 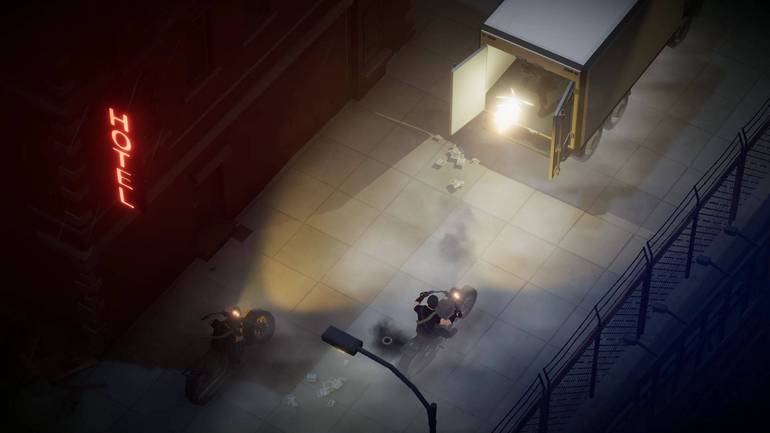 I played Midnight Fight Express on PC, meeting all the minimum requirements for good performance. In nine hours of play, there were three bugs that caused the game to run without much of a crash. The only fix I found was to restart the game.

However, an update was released a day before launch that may have fixed what was literally the only performance issue during the game.

Verdict: Is it worth playing? 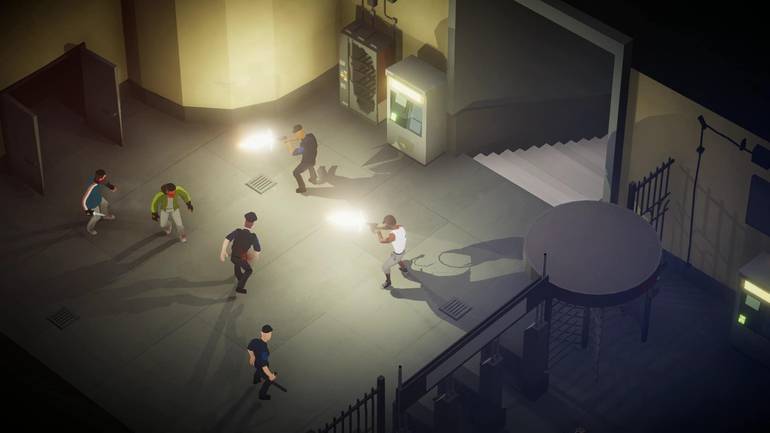 Midnight Fight Express is definitely worth your time. With a total of nine hours of play, the game gave me a super fun and satisfying experience. With different stages, the title constantly introduces new gameplay mechanics, preventing it from becoming a boring campaign.

I emphasize that the game was basically developed by one person, but if I didn’t know this beforehand, the possibility would never have occurred to me. This is a very well designed game, both in terms of level design and art.