Lately we’ve had a lot of indie games with absurd features, stunning art directions, deep and moving narratives, full of metaphors for things in real life.

Sifu, Kena and Trek To Yomi are examples of games with small budgets but gigantic symbolism.

Lucky for us, Hazel Sky arrives to prove once and for all that video games are art forms (if you’re still in doubt), a national pastime that takes us on a fascinating journey.

The sky is the limit

In Hazel Sky we control a young Shane, an aspiring engineer who needs to prove his skills and return to the floating city of Gideon, the game starts with a short introduction about the boy’s family and shows that his father will take him far. island.

At the start of the game, we will explore a small area to connect with the first collectors of the game, as well as learn a little about our mission, which is to build a vehicle that will take us to the city.

The first part works as a game tutorial showing simple commands that will be used throughout the game, we can run, jump, climb and grab things, in certain places it will be necessary to swim to overcome puzzles.

When we complete the first challenge, which will not be difficult, we are literally thrown into the air in a scene endowed with some beauty, the logo of the game appears in the blue sky, following the rule that I particularly like, which is to present the name of the game after entering your world.

The flight does not last long and we will make the first forced landing, I say this because no one will be surprised by the need for new attempts.

On the new island we will meet Erin, a girl who also passed our character exams and she will be our only contact throughout the story. A mysterious character with interesting comments throughout the game.

Ahead of the new challenge, we begin to see that the beauty of this game hides something deeper that goes beyond social criticism and flirting with the occult. 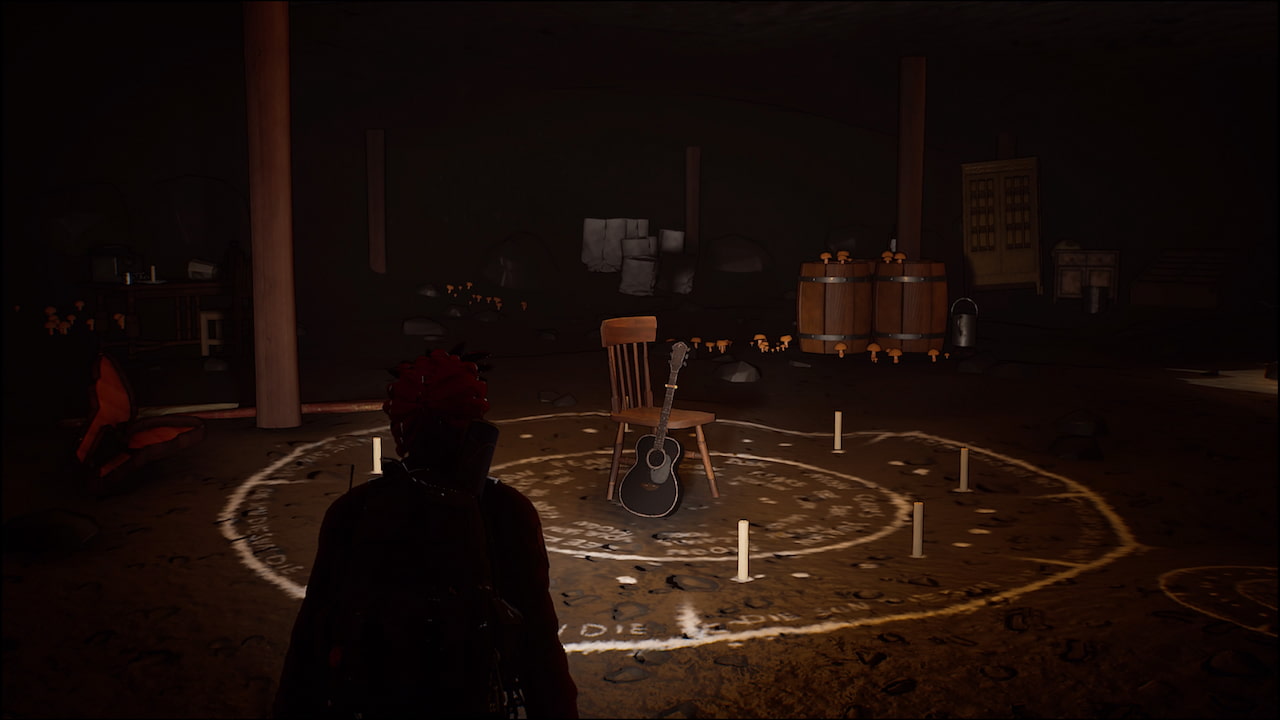 The Mysterious World of Hazel Sky

When we calmly look at the world of the game, after admiring the vivid colors and unique aesthetics, we will see that there is no simple story here, and that the mysteries that exist go beyond what is happening in the floating city, attention is needed. To slowly understand the meaning of certain things.

On our travels we will come across simple objects, but it seems to be rare for Shane, like when we find what he calls a “strange fruit”, a banana, or when he is surprised to find a harmonica and treats it as if it were a real relic.

Delving deeper into the challenges, the discoveries make even stranger, corpses are dumped in the testing areas, some indicating how desperate their last moments of life were.

Everywhere we find radios playing messages that fill our understanding of history, through them we discover that a group of rebels are in conflict with Gideon’s rulers. 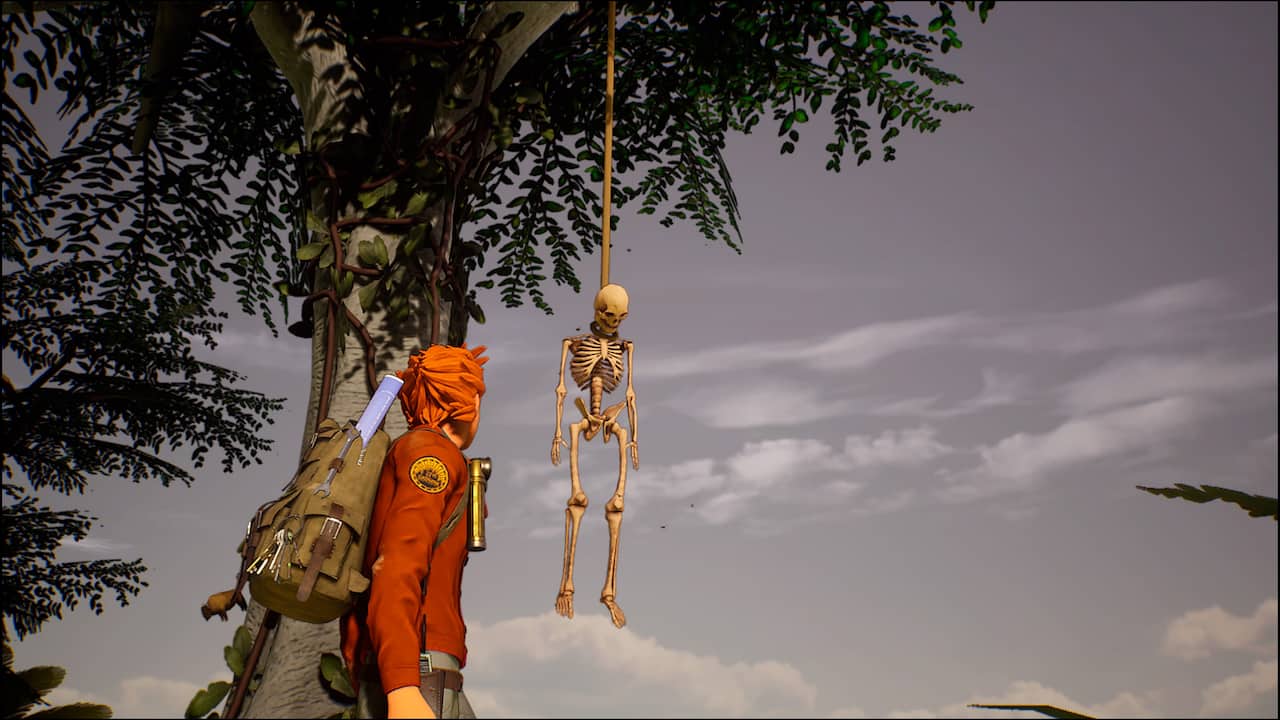 As we listen more closely to the radio, it is a fact that the authoritarian regime is collapsing in the face of opposition attacks, but these are not the only programs we can listen to.

The music and commercials also convey information, at one point a superstition-laden commercial proves once and for all that this game has its own narrative weight.

Shane occasionally contacts Erin, they exchange information, it doesn’t take us long to realize that certain prohibitions are bordering on dictatorial, both pointing out that their conversation is wrong, other times Erin says. That Shane is making a mistake by simply listening to the song.

Music, by the way, has a fundamental role in the story, it is connected to the great mystery of the game.

There is a tone of abandonment on the islands, animals are killed by something inexplicable, buildings are destroyed with signs that something strange has happened, the story is told in small details, and many things will have more than one interpretation for each player. 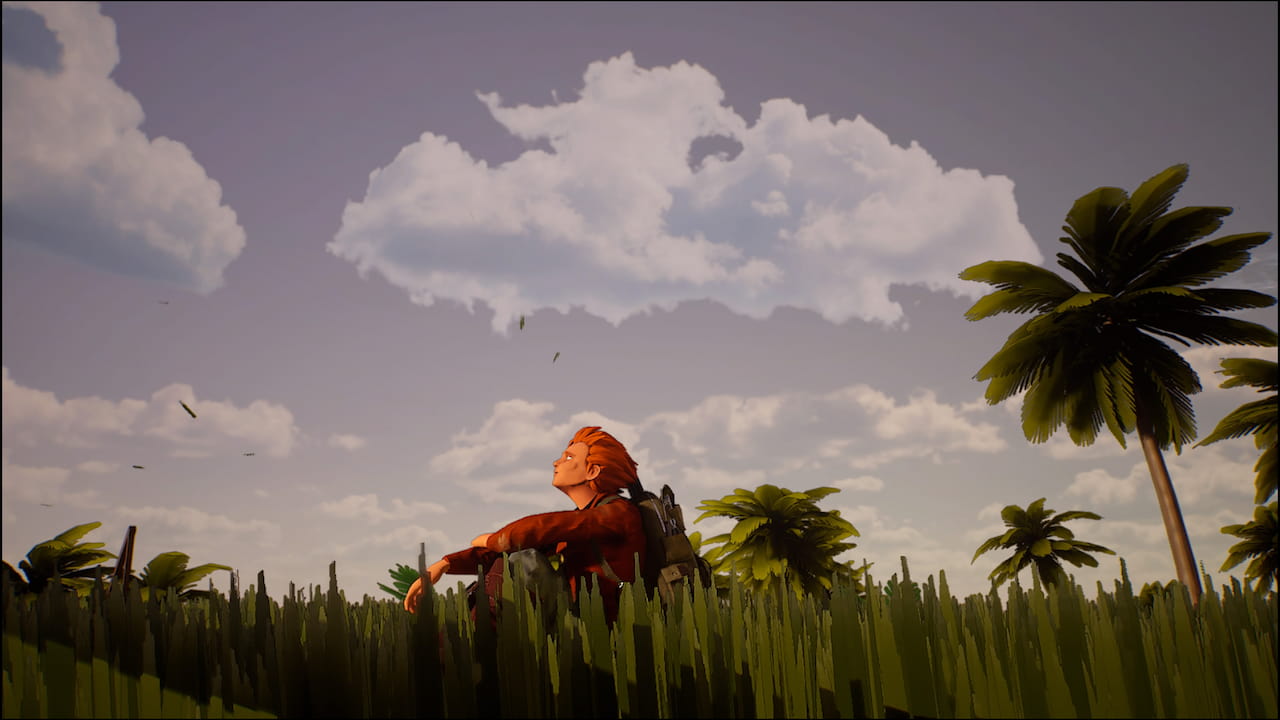 The challenges are almost zero difficulty, the focus is actually on the narrative and discovering the world of Hazel Sky, everything is very explained, almost didactic.

And the challenges are pretty much the same except for the last one. The game has 4 chapters and during the stages we will go through caves, factories, oil platforms, etc. In the midst of the solitude of the islands, there is practically no fauna.

One thing that gets a lot of attention is the theme that borders on steampunk, which gives the game a very nice identity.

The plot of the game may seem confusing and pointless after a short introduction, but every vehicle spotted (and yes, here they call everything that is designed to fly, vehicles) creates anticipation for what we will find in the new level, pirate ships. Or ships focused on collecting resources are part of the scenarios that we will be able to explore, between one puzzle and another and in search of keys that will open new paths.

The islands are similar in appearance, each has its own secrets, the other has hideouts and mines that store more information from the engineers who passed there.

Shane is focused on his mission because he wants to be a useful citizen for the city, this can be proven by the quotes about the project tracking (blueprints with our goals) when we spend some time studying the map.

And when Erin talks about something missing from the floating city, she questions whether it’s right to go against her own comrades. The so-called flying machines have a strong symbolism with the personality of the young Shen.

Not only in the ease of flight, but also in the development of his character, it fits the atmosphere of the game, that there is a strong criticism of the dictatorial movements in our world, but I will not risk mentioning it. so as not to be unfair to the creators. 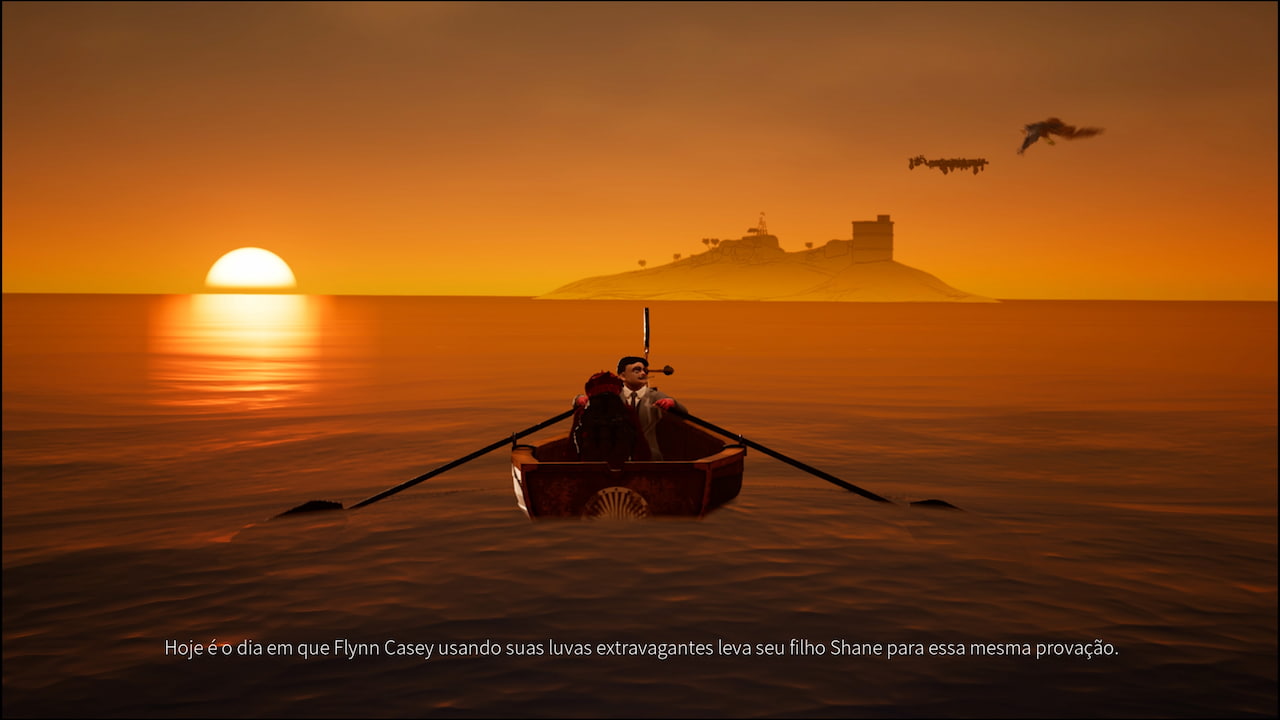 The books contain a lot of information about ancient engineers and the machines they created, and include quotes about strange things about sea monsters and newborns that were believed to be the product of non-human activity.

Similar to what was considered a curse simply because of a lack of knowledge of things, there is even a hint of the feeling that music evokes in people, something demonized years ago.

Hazel Sky blends gameplay and storytelling perfectly, it doesn’t try to push itself further than it can, it’s an honest game and made with love from the team, every detail of the game seems to have been thought through so it’s not just some screen game.

If it was just a game with no story, almost no dialogue, it would still be worth playing, it’s not stressful, it’s relaxing to play and do the tasks of the main character, because it’s a national game, it’s nice to have something. So well done.

From a technical point of view, the game does not bring anything revolutionary, but what it does have, it is perfectly executed, in the third phase, the biggest of them, all the mechanics will be put into practice.

One of the main features of the game is its soundtrack, it lightens the atmosphere of the game and sets the tone of the narrative as I mentioned earlier.

Understanding the sentence or the final message of the game can be frustrating for some, even finishing the game twice, my interpretation was something beyond what I was playing, it was more of a metaphorical side.

I believe the creators wanted to keep this “everyone will learn something” tone, this is because the game has two endings, one that is considered a mystery, requires more exploration on the part of the player, and just like the first, will bring more questions than answers.

And not only its ending, at several moments, the main character will have dreams and this will show the other side of the story, combining parts of the main narrative and revealing secrets. 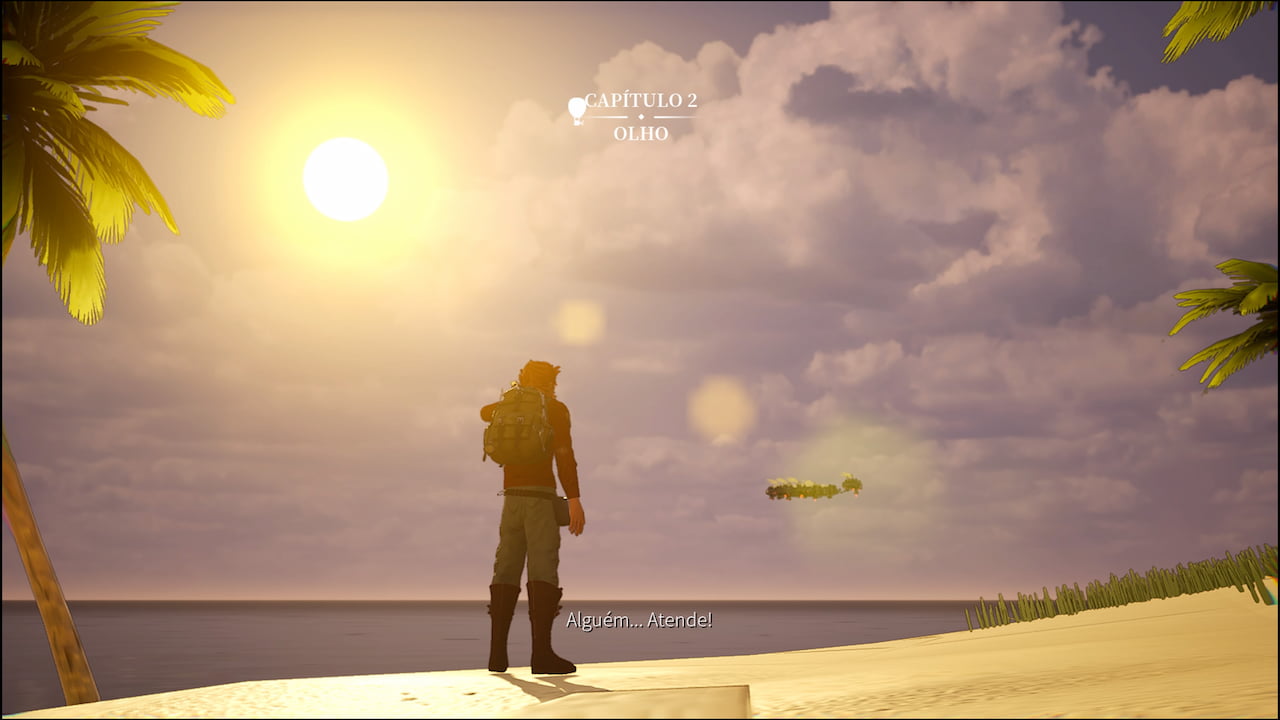 It is clear that the game is inspired by fantasy works such as fairy tales, pirate legends, etc.

I strongly advise the readers of this simple text to realize the secret ending and pay attention to the little things around the world, there are moments that you can miss and it is very good when you see them, even if it is not. Create a reward for the plot.

Finally, Hazel Sky deserves the praise it has received since the demo was released, a beautiful game, it’s a shame it’s so short that it can be finished in just under two hours.

This puzzle is very short considering its simplicity. What will increase during this time will be your exploration and search for all the collectibles that the game has to offer.

This review is based on the copy provided by Coffee Addict Studio, we appreciate your trust in our team.